When the bible refers to thrones, powers, rulers and authorities, it's in the context of evil forces. These evil forces, or spirits, are allowed to exist in the presence of mankind for God's purpose of teaching man the difference between good and evil and giving those who love Jesus the power to overcome them. Adam and Eve chose to eat from the tree of the knowledge of good and evil and ever since then, man has had to battle these evil spirits. It's hard to understand the futile thinking of such evil forces, because even they have their existence in Christ. They're not redeemed by the blood of the lamb, but nevertheless, only exist because of Him. It's important to know that these evil spirits were not made evil, but rather rebelled against God and became evil. 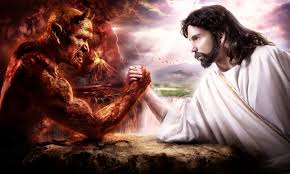 Posted by Cardboard Box Church at 8:54 AM