The enemy brings confusion in order to block blessing

The enemy will do his best to bring confusion and misunderstanding. There's a need to understand what the Spirit is doing, so that opportunities to bring glory to God are not missed, amidst the ignorant.

Now bands of raiders from Aram had gone out and had taken captive a young girl from Israel, and she served Naaman’s wife. She said to her mistress, “If only my master would see the prophet who is in Samaria! He would cure him of his leprosy.”

Naaman went to his master and told him what the girl from Israel had said. “By all means, go,” the king of Aram replied. “I will send a letter to the king of Israel.” So Naaman left, taking with him ten talents of silver, six thousand shekels of gold and ten sets of clothing. The letter that he took to the king of Israel read: “With this letter I am sending my servant Naaman to you so that you may cure him of his leprosy.”

As soon as the king of Israel read the letter, he tore his robes and said, “Am I God? Can I kill and bring back to life? Why does this fellow send someone to me to be cured of his leprosy? See how he is trying to pick a quarrel with me!” - 2Kings 5:2-7 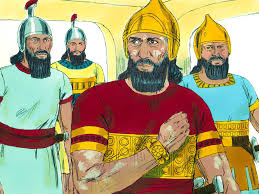