Is Pope Francis the False Prophet of Revelation?

Pope Francis has made a number of decisions that conservative Catholics see as being against traditional Catholic doctrine. The Pope is a left wing globalist. Canon lawyers and theologians for the Vatican hosted a conference in Paris this past March to discuss “how to depose a heretical pope”? (http://www.crossmap.com/news/canon-lawyers-and-theologians-to-hold-conference-on-deposing-the-pope-31709)

If you're Roman Catholic, you need to stay informed concerning both the decisions that Pope Francis makes and what the bible says about the last days False Prophet.

Francis of Assisi, who is one of my favorite Christians ever, wrote this concerning the last Pope: "At the time of this tribulation a man, not canonically elected, will be raised to the Pontificate, who, by his cunning, will endeavor to draw many into error and death.…for in those days Jesus Christ will send them not a true Pastor, but a destroyer."

I saw another beast coming up out of the earth. He had two horns like a lamb, and he spoke like a dragon. He exercises all the authority of the first beast in his presence. He makes the earth and those who dwell in it to worship the first beast, whose fatal wound was healed. He performs great signs, even making fire come down out of the sky to the earth in the sight of people. He deceives my own people who dwell on the earth because of the signs he was granted to do in front of the beast; saying to those who dwell on the earth, that they should make an image to the beast who had the sword wound and lived. It was given to him to give breath to it, to the image of the beast, that the image of the beast should both speak, and cause as many as wouldn’t worship the image of the beast to be killed. He causes all, the small and the great, the rich and the poor, and the free and the slave, to be given marks on their right hands, or on their foreheads; and that no one would be able to buy or to sell, unless he has that mark, the name of the beast or the number of his name. Here is wisdom. He who has understanding, let him calculate the number of the beast, for it is the number of a man. His number is six hundred sixty-six. - Revelation 13:11-18 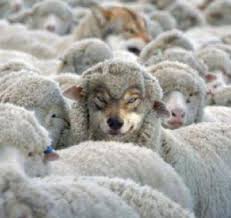