Mockers are desperate to belittle the President

It never ceases to amaze me how the left and Godless people keep trying to belittle President Trump. Yesterday, during the Solar Eclipse, President Trump looked at the sun without those ridiculous sun-glasses on and the media is now trying to make him look like an idiot. It's deplorable how Godless people disrespect a man who, at the age of 71, decided to drain the swamp of American politics, with his own money.

I looked at the sun without those ridiculous sun-glasses on as well. My eyes are doing fine and I will not have any damage to my eyes. I would like to see the proof that looking at a Solar Eclipse is such a horrible thing to do. Just because NASA says you shouldn't do it, doesn't mean they're right. In fact, much of what NASA says is a lie anyway, so why trust them.

In this last hour, filled with mockers, we need to have discernment from the Spirit of God to know what is right and what is wrong.

Drive out the mocker, and strife will go out; yes, quarrels and insults will stop. - Proverbs 22:10 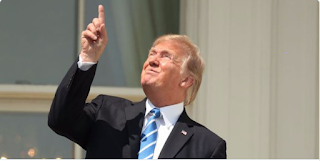