Aiming for the prize

It's important to keep the right perspective about belief in Christ. Many believers latch onto teaching that causes them to believe they've already arrived at the goal. They reject the teaching that explains how this is a race that has to be run till the end. Balanced teaching produces mature believers. In the New Testament there is more admonition to stay the course than there is teaching on identity and sonship. Paul makes this clear in his letter to the believers at Philippi.

Philippians 3:10-14 is one portion of scripture that shows this.

I want to know Christ—yes, to know the power of his resurrection and participation in his sufferings, becoming like him in his death,  and so, somehow, attaining to the resurrection from the dead. Not that I have already obtained all this, or have already arrived at my goal, but I press on to take hold of that for which Christ Jesus took hold of me. Brothers and sisters, I do not consider myself yet to have taken hold of it. But one thing I do: Forgetting what is behind and straining toward what is ahead, I press on toward the goal to win the prize for which God has called me heavenward in Christ Jesus. - Philippians 3:10-14 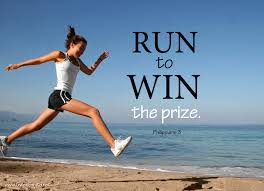 Posted by Cardboard Box Church at 7:48 AM