The power of our words

Our words are very powerful and we will eat the fruit of them. It's good to know this and be reminded of it because we learn to be careful with our words and even limit them. An Amalekite learned this the hard way. When King Saul of Israel went into battle against the Philistines, he was wounded critically and then killed himself so that he wouldn't be tortured by the Philistines. The Amalekite came to David and claimed to have killed Saul, thinking to get rewarded by David. Although it's true that Saul, out of jealousy, wanted to kill David many times, David still respected God's anointing on Saul. David had the Amalekite put to death for claiming to have killed God's anointed, even though it wasn't true. David told the Amalekite that his own mouth testified to killing King Saul and he would be held responsible.

We see this spiritual truth played out in 2Samuel 1:6-16

“I happened to be on Mount Gilboa,” the young man said, “and there was Saul, leaning on his spear, with the chariots and their drivers in hot pursuit. When he turned around and saw me, he called out to me, and I said, ‘What can I do?’ “He asked me, ‘Who are you?’ “‘An Amalekite,’ I answered. “Then he said to me, ‘Stand here by me and kill me! I’m in the throes of death, but I’m still alive.’ “So I stood beside him and killed him, because I knew that after he had fallen he could not survive. And I took the crown that was on his head and the band on his arm and have brought them here to my lord.”

Then David and all the men with him took hold of their clothes and tore them. They mourned and wept and fasted till evening for Saul and his son Jonathan, and for the army of the Lord and for the nation of Israel, because they had fallen by the sword. David said to the young man who brought him the report, “Where are you from?” “I am the son of a foreigner, an Amalekite,” he answered.

David asked him, “Why weren’t you afraid to lift your hand to destroy the Lord’s anointed?” Then David called one of his men and said, “Go, strike him down!” So he struck him down, and he died. For David had said to him, “Your blood be on your own head. Your own mouth testified against you when you said, ‘I killed the Lord’s anointed.’” - 2Samuel 1:6-16 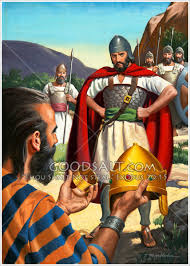 Posted by Cardboard Box Church at 7:00 AM