Punching the demons out

When Ahava and I were in Scotland visiting the Curwen family, we met a man who wanted prayer because he'd been having trouble walking consistently with the Lord. Sin kept getting the better of him. When you come across someone in this situation and they're confessing faith in Christ, you have to be tough because the word says so.

Stern discipline awaits anyone who leaves the path; the one who hates correction will die. - Proverbs 15:10

I recorded the deliverance situation and will be publishing it on my Youtube Channel on Tuesday June 27, 2017 at 3:00 PM EST. During this deliverance session I was punching the man in the gut to expel demons and it was bringing him peace.

Trustworthy are the blows of a friend, dangerous, the kisses of an enemy. - Proverbs 27:6 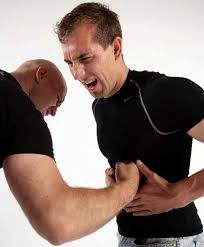